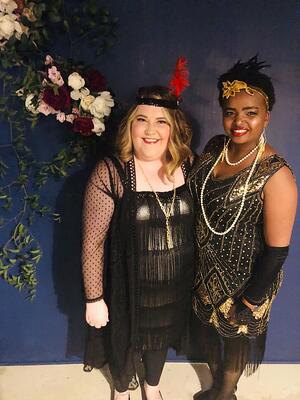 Earlier this month we held A Party At Gatsby's to raise awareness about adoption and to celebrate during National Adoption Month. A sweet moment happened between two birth mothers and an adoptive mom who attended the event.

"Gatsby always makes sure his celebrations are the thing to talk about. Well, just like Gatsby, we believe there’s something to celebrate and talk about. November is National Adoption Month, and Muthoni and I believe not only in spreading Adoption positivity, but that birth moms should also be celebrated. Did you know that while the stereotype of birth moms, is a young adult in crisis who didn’t want her baby, most birth mamas look like M and I? Normal women who were faced with an unplanned pregnancy and decided to make a plan so their babies would have such full and promising lives. Not because they weren’t wanted, but because we knew it was the best choice for us as a whole. Adoption is something to be celebrated because it not only tells of a loving family, but the love of a strong woman who started the story. {btw—the best part of tonight was having an adoptive mom come up to us overjoyed to share that she heard us tell our stories at a Gladney adoption orientation, and proceeded to celebrate with us as she told us they recently adopted their sweet baby afterwards. It means the world to hear that our stories matter and that people connect with us through them.} 💜#birthmomstrong #iamGladney#ApartyAtGatsbys"

We asked Cristina, the Adoptive Mom, about their conversation and she said "it was so nice to see them again and see that they are really part of the Gladney Family! I told them I was at a Gladney Orientation and I wanted to thank them for being so open and for how they shared their hearts so openly with everyone. Then we talked about their interaction with their adoptive parents because I wanted reassurance from their perspectives that I'm doing this right."